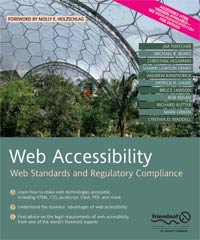 Almost a year ago, Chris Mills contacted me to say that friends of ED were planning a full rewrite of “Constructing Web Accessibility” that I commissioned in 2001, and did I want to help? Partly out of sentimentality, and partly because I wanted to experience publishing from the other side of the desk (as hapless author rather than cigar-chomping fatcat computer publisher), I agreed.

All shiny and new

My first job (for which I’m credited as “Editorial Consultant”) was to go through and work out what to jettison. As the first edition was written in 2001, it was full of table-based markup examples, deprecated attributes and the like. That’s gone. I was adamant that we needed a chapter on PDF, and I recommended Andrew Kirkpatrick, from the National Centre for Accessible Media (and now an Adobe employee). We needed a chapter discussing the accessibility of JavaScript, so who better than the guy who invented the term “Unobtrusive JavaScript”, Chris Heilmann?

The old CSS chapter mostly evangelised the use of CSS, so we nuked that and replaced it with a round-up of how CSS can help – and hinder – accessibility, and a discussion of image replacement techniques, written by Richard Rutter. There’s a really neat case study on retrofitting a website for accessibility by Patrick Lauke, which was written two weeks before publication date, after we rejected a dreadful draft from the people we first commissioned it from.

I also did tech review of all the chapters, along with Gez Lemon, who I got on board as he’s much much more thorough than I am. He did a brilliant job of getting the most from the authors without upsetting them (Some even thank him – talk about Stockholm syndrome!). And finally, I did a bit of writing, too: a nice little introduction, outlining what has changed in the world of accessibility since the first edition; I reviewed and updated the glossary, and contributed an Appendix on PAS 78 (which has already gone slightly out of date as I mention the allegedly prohibitive cost!).

The chapters that aren’t new have been completely re-written. The author list is really impressive. The lion’s share of the book is written by Jim Thatcher, who co-developed one of the first screen readers for DOS in 1984-85, called IBM Screen Reader, and is an expert witness in the current Target law suit.

The legal chapters are written by Cynthia Waddell, who wrote the precursor to the WCAG, the San José Web Page Disability Access Design Standard in 1996 and which was designated as a ‘best practice’ by the federal government.

Bob Regan collaborated on a chapter about accessible Flash, and he should know the subject, as he was Product Manager for accessibility at Macromedia (now Adobe), as well as being a genuine friend of accessibility.

Then there’s Shawn Lawton Henry of the W3C’s Web Accessibility Initiative, who leads the W3C’s worldwide education and outreach for accessibility, and whose presentation in Seattle, 2001 and subsequent debate with Zeldman persuaded me to commission the first edition of the book.

Oh, and some chick named Molly wrote the foreword.

Lastly, Mike Burks and Mark Urban of the International Center for Disability Resources on the Internet contribute chapters on WCAG 2 and Implementing accessibility in an organisation.

I learned some useful tips while reviewing it, and believe that it’ll help convince managerial types as well as being the most up-to-date technical information on how to design and test accessibility. Check out the table of contents and sample chapters.

Excellent news, been waiting a while for this. As you’re the first to have an affiliate link up that I’ve spotted – you win my sale 😉

Great stuff! I trust you and Patrick will be shilling this suitably at Geek in the Park?

It’s crazy to think the original is nearly 5 years old. How time flies.

Whohooooooooo. I’ve been waiting for this puppy. 😀 Cheers Brucey. Sounds like there are some good updates in there.